The History of Brownies 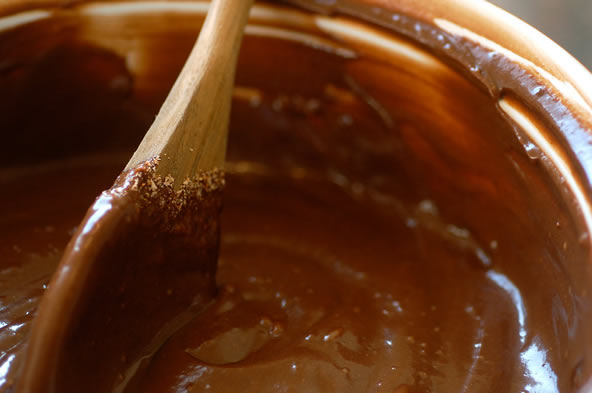 Some sources suggest that it was also at the Columbian Exposition that new chocolate baked good was introduced. As the story goes, the wealthy socialite Mrs. Bertha Potter Palmer:

…asked her chef at The Palmer House Hotel in Chicago to create a dessert that could be tucked into a box lunch for ladies to eat while attending the Columbian Exposition. The result was a super-rich, fudgy-chocolate confection – the Palmer House brownie. The brownie remains on the hotel’s menu, but the name of the creative chef, alas, is lost in antiquity.

These brownies, possibly the first ever made, included significant amounts of chocolate, butter, and sugar, as well as cake flour and eggs. Interestingly, they were also topped with walnuts and an apricot glaze. They are still served today at what is now The Palmer House Hilton in Chicago.

The use of chocolate in baking increased dramatically in the late nineteenth and early twentieth centuries, largely thanks to the efforts of enterprising housekeeping and cooking educators who partnered with industry in the name of “domestic science.” At the Columbian Exposition, for example, Walter Baker & Company demonstrated chocolate making with their equipment and offered free samples to visitors. In an attempt to encourage the use of their chocolate in cooking, they also provided free copies of Maria Parloa’s “Choice Receipts,” a recipe brochure with suggestions on how to use chocolate and cocoa in home kitchens.

Maria Parloa, or “Miss Parloa,” sometimes called the “first celebrity cook,” was a Boston-based educator and author, and the founder of two cooking schools. Parloa was part of a larger movement of educators dedicated to teaching women domestic science skills in the late 1800s and early 1900s.

Around the turn of the twentieth century, advances in science transformed many housekeeping and cooking tasks that were heavily laborious and largely carried out by women. These included improvements in sanitation technology, the advent of gas and electricity in the home, and the proliferation of tools and concepts designed to make home-based tasks more efficient and business-like.

One well-known example is American culinary expert Fannie Farmer’s innovation of “level measurements,” an alternative to cumbersome weighing of quantities or unscientific notions of a “pinch,” “dash,” or “smidgen.”

At the Boston Cooking School, founded in 1879, educators like Maria Parloa and Fannie Farmer offered instruction to women on how best to run a kitchen and a home. These educators promoted their ideas in cooking schools, magazines, clubs, and with lecture tours, with the fundamental belief that efficiently run, business-like homes were good for America.

They partnered with institutions in industry, education, and government, forming degree-granting programs, a professional organization, a journal, and annual meetings, to professionalize homemaking and endorse what would eventually come to be known as “home economics.”

It was most likely thanks to the domestic science network and the increasing popularity of related cookbooks, magazines, and cooking schools that brownies came to be known throughout the United States. The question of who published the first brownie recipe is difficult to answer. Fannie Farmer’s 1896 Boston Cooking-School Cook Book included a recipe for “brownies” that is significantly different than what most have come to expect; it contained no chocolate.

The first published recipe for brownies made with chocolate available on record may be from the Service Club of Chicago’s 1904 Cook Book, a publication of recipes contributed by club members in a section on “Candy.” The recipe, called “Bangor Brownies,” likely a reference to a long-told but as-yet-unsubstantiated story that chocolate brownies originated in Bangor, Maine, looked like this:

Also in 1904, Eleanor P. Quimby’s Home Cookery was published in Laconia, New Hampshire, with the exact same ingredients and proportions as the Bangor Brownies, plus “a little salt” and a teaspoon of vanilla.

It is thus possible that these recipes for chocolate brownies were derived from the same original recipe. (Though a popular myth suggests that Mildred Brown Schrumpf, nicknamed “Brownie,” of Bangor, Maine, was the first to publish a brownie recipe, Schrumpf was not born until 1903 and was therefore too young to have developed the dessert.)

Two more chocolate brownie recipes followed in prominent publications, first in Fannie Farmer’s 1906 version of the Boston Cooking-School Cook Book, with a recipe similar to the Bangor Brownies mentioned above. This was certainly the most widely circulated version of the chocolate brownie recipe due to the immense popularity of Farmer’s work. In 1907, Maria Willett Howard, a student of Farmer’s, wrote two brownie recipes for Lowney’s Cook Book (from the Walter M. Lowney chocolate company, mentioned above), with differing amounts of egg, chocolate, and sugar. So popular was the Boston Cooking-School Cook Book, writes Laura Shapiro, that: “When Fannie Farmer died in 1915, over 360,000 copies of the book had been sold, and it was still coming out regularly in printings of 50,000 each.”

One is also left wondering how chocolate brownies got their name. Much like in the question of the brownie recipe origin, there is no conclusive answer. An 1897 Sears, Roebuck catalogue included elf-shaped sweets called “brownies,” possibly made with molasses or chocolate.

Many who have searched for the origin of the name for chocolate brownies have suggested that it was inspired by Palmer Cox’s widely enjoyed illustrated children’s text The Brownies: Their Book, published in 1887, though this has yet to be definitively proven.

Cox’s book was widely enjoyed at the turn of the century, and the Brownies name was also used to refer to a kind of cake, a brand of Eastman Kodak camera, and young Girl Scouts. While the origins of chocolate brownies – in recipe and name – remain obscure, one thing is certain: chocolate companies, domestic scientists, and cookbooks were key to popularizing the chocolate brownie during this time period.

The development of domestic science and home economics and their partnership with industry altered American cooks’ relationships with raw food. More and more, industry aimed to remove the labor of handling raw food from home kitchens. Especially following World War II, frozen, dehydrated, or canned food was increasingly available to consumers. As Laura Shapiro explains in Something From the Oven: Reinventing Dinner in 1950s America, factory-made food also contributed to changing the American palate – in general, it was very sweet, very salty, or very bland and contained a myriad of artificial flavors. Knowing that due to their serious compromises in taste prepared or semi-prepared foods could not be easily sold to consumers on the basis of flavor, the food industry started to market the notions of efficiency and consistency, suggesting that their products could save busy housewives valuable time and avoid the frustration of recipes gone awry. In this way, the industry actively worked to change consumer notions of time in relation to cooking labor.

Simultaneously, the American chocolate industry was undergoing a significant expansion due to technological advances. Chocolate companies like The Hershey Company and Mars, Incorporated developed means to improve the shelf life of milk chocolate and produce larger quantities of candy in factory settings, making chocolate ever more available and affordable.

These companies, too, made cost-saving and mass-production-enabling flavor changes to which the American public eventually became accustomed, by including less cacao, more dairy and sugar, and more preservatives than early American chocolate. The chocolate industry thus played a major role in changing American tastes in chocolate to something significantly less “chocolatey.”

Classic American brownies were heavily affected by these developments, primarily through changes in the chocolate available and the culinary innovation of prepared mixes. Three large food companies – General Foods, General Mills, and Pillsbury – played an important role in the development of cake and brownie mixes in the middle of the twentieth century, relying heavily on national distribution and advertising. Companies sponsored national “Bake-Offs” or recipe contest events with cash prizes to encourage home cooking innovation. They also regularly produced television advertisements and sponsored cooking shows to promote their products.

The following 1960 television commercial for Duncan Hines Devil’s Food chocolate cake mix suggests that the mix holds a “Chocolate Tree Secret” from Africa, something that one could not replicate, perhaps, without this exact brand:

Another television commercial, this one from 1965 for Betty Crocker Chocolate Fudge Brownie mix, explains the value of consistency in prepared mixes: “With Betty Crocker, you always get chocolatey, chewy, candy bar-good brownies made with all Hershey’s cocoa.”

Through co-branding, Betty Crocker/General Mills and Hershey’s were able to share in the promotion of this brownie mix.

Food companies were also able to capitalize on microwave technology and the growing number of latchkey children beginning in the 1980s, with microwaveable brownies, as evidenced in the following television commercial. Companies promoted their products as models of efficiency, as seen here:

By focusing on these products’ ability to provide shortcuts while maintaining effective results, cake and brownie mix producers were able to convince home cooks around the country to purchase their products, while forever altering the American relationship to home cooking and taste.

Chocolate brownies retain a powerful hold on the American palate and imagination. Today, brownies can be found with a number of flavor variations and add-ons, such as peanut butter, mint, coffee, raspberry, white chocolate, almonds, raisins, candies, or caramel. In the United States, one is never far from an artisan or mass-produced brownie. Controversially, brownies have also been host to marijuana mix-ins in recent decades, and with the increasing legality of medical marijuana usage, they have become one means of therapeutic oral delivery of the drug.

Some brownie recipes even call for beets, black beans, or pureed carrots and spinach, as a means to sneak healthier ingredients into what was originally designed as a dessert. One divisive product recently launched on the market, Lazy Cakes, is a brownie that includes a large dose of melatonin to make consumers sleepy, a counterpart to the host of contentious energy drinks currently available.

Emerging digital research technology can help us to better understand the trajectory of brownie popularity over time. The Google Books Ngram Viewer tool suggests that the word “brownies” has been published significantly more since the 1970s.

While further research is necessary to uncover the roots of the increase in usage of the word in published books, one can assume that it is at least in part due to the ever-growing demand for the classic dessert, as evidenced by the fact that entire cookbooks are now devoted solely to chocolate brownies.

British pastry chef and chocolatier Paul A. Young has also tried his hand at the American classic, to great acclaim. Many consider his brownie the best in London.

For my part, I prefer a dark chocolate, fudgey brownie made from scratch. Food Network cooking show host Ina Garten, “The Barefoot Contessa,” has a strong recipe for what she has dubbed “Outrageous Brownies.” I recommend using a high quality cocoa powder in place of the espresso that the recipe calls for, as well as high quality unsweetened and dark (70% cacao content or higher) chocolate. Never be afraid to add a bit more chocolate than a brownie recipe calls for, especially when in pursuit of fudgey results.

Summer is here. Stop in and get your ice cream on. We feature: Tillamook Ice Cream and Umpqua Ice Cream. Cone's Shakes, Malts and Sundaes. 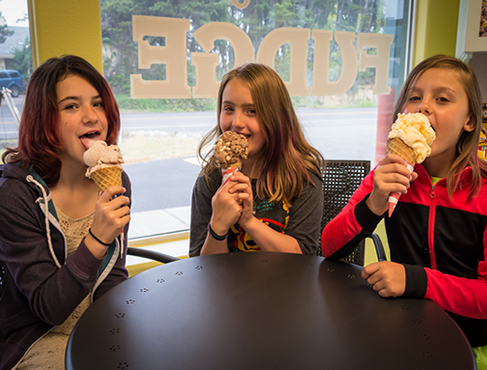 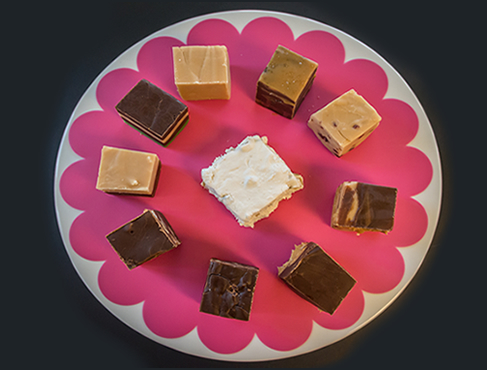